Just to continue a minute on a theme of politics and books:

Literature tends to expose and explore the political and cultural conventions of the day. In most cases this is not deliberate. Novels, or at least the best novels, are generally built on an interest in humanity not on agendas.

Sometimes the social and political conventions come tumbling through, unquestioned, to land in a slimy heap on your enjoyment. This can be all the more painful if it lands on your nostalgia too.

My favourite book as a child was ‘The Hundred and One Dalmatians’ by Dodie Smith. My copy looked like this until I covered it with brown paper: 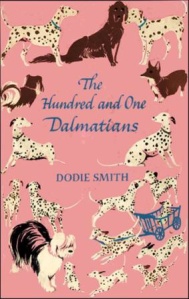 This was the book I read when I was stuck in bed with a bug – we were sent to bed when ill. It was the book I picked up for comfort reading, long past knowing the plot off by heart. I loved the canine characters with a passion despite my suspicion of dogs in real life. Of course it was because of their very best human qualities of loyalty, intelligence and individuality.

But, hold on a minute, what about the beautiful Missis Pongo? Sweet, dizzy Missis Pongo, who has trouble telling her right from her left, who depends on her gallant husband and his calming influence on her femininity as they face the dangers of their quest to find their puppies.

How could I not have seen through this? Can I forgive Dodie Smith (who also wrote the highly enjoyable ‘I Capture the Castle’), for implanting a sexist subtext in my impressionable mind?

Can I allow myself to ignore the subtle influences emanating from the book?  After all I also had the feisty Amazons to look to (I was even more wary of boats than dogs). And I have to wonder if Dodie even recognised, herself, what the character of Missus represented.

And what else did I learn from ‘The Hundred and One Dalmatians’?

I will never forget the description of the Dearlys and dogs contentedly strolling home from Regents Park in the evening, not knowing that they would hear the news that the puppies had been stolen – the happiness of a moment given the lie by its follower, beyond which nothing will be the same again.

I will never forget Missis forgiving the boy who had thrown a stone at Pongo and injured him. As she approached him again the boy threw his bread and jam, for want of a nearby stone. Kind Missis decided that he simply needed a ball to throw, and his parents should buy him one. People currently call it emotional intelligence.

Illustration by Janet and Anne Grahame-Johnstone

Should we forgive books their non-PC subtexts? What about children’s books? Roald Dahl, anyone?  Feel free to comment in the comments section.

This blog post is part of a collection of blogs about growing up with books: July Blogsync

My most recent review on Goodreads:

The Accidental Woman by Jonathan Coe

Maria is the accidental woman, a woman to whom things happen, with each step in life dictated by more powerful forces. A consciousness that starts with the memory of an accident in the hills on the outskirts of Birmingham, where she loses her family and scrapes her knee and knows the joy of being reunited, carries on in just that way. Maria is waiting to be found, indeed awoken, all through the story. She slumbers, while all around – friends, family, spouse – create their own narratives regarding who they are, what they feel and what they can do. Maria slumbers on, watching and also knowing with a clear dispassionate insight how things really are – she has no pretentions. Meanwhile, the writer is full of himself. He invites the reader in to marvel at the goings-on of all the characters, and to be amused. He’s a Jane Austen on acid, and maybe he needs to come down. But the journey is interesting and entertaining. So: a funny, interesting, sad novel; and a bit irritating. 3 stars.

View all my reviews